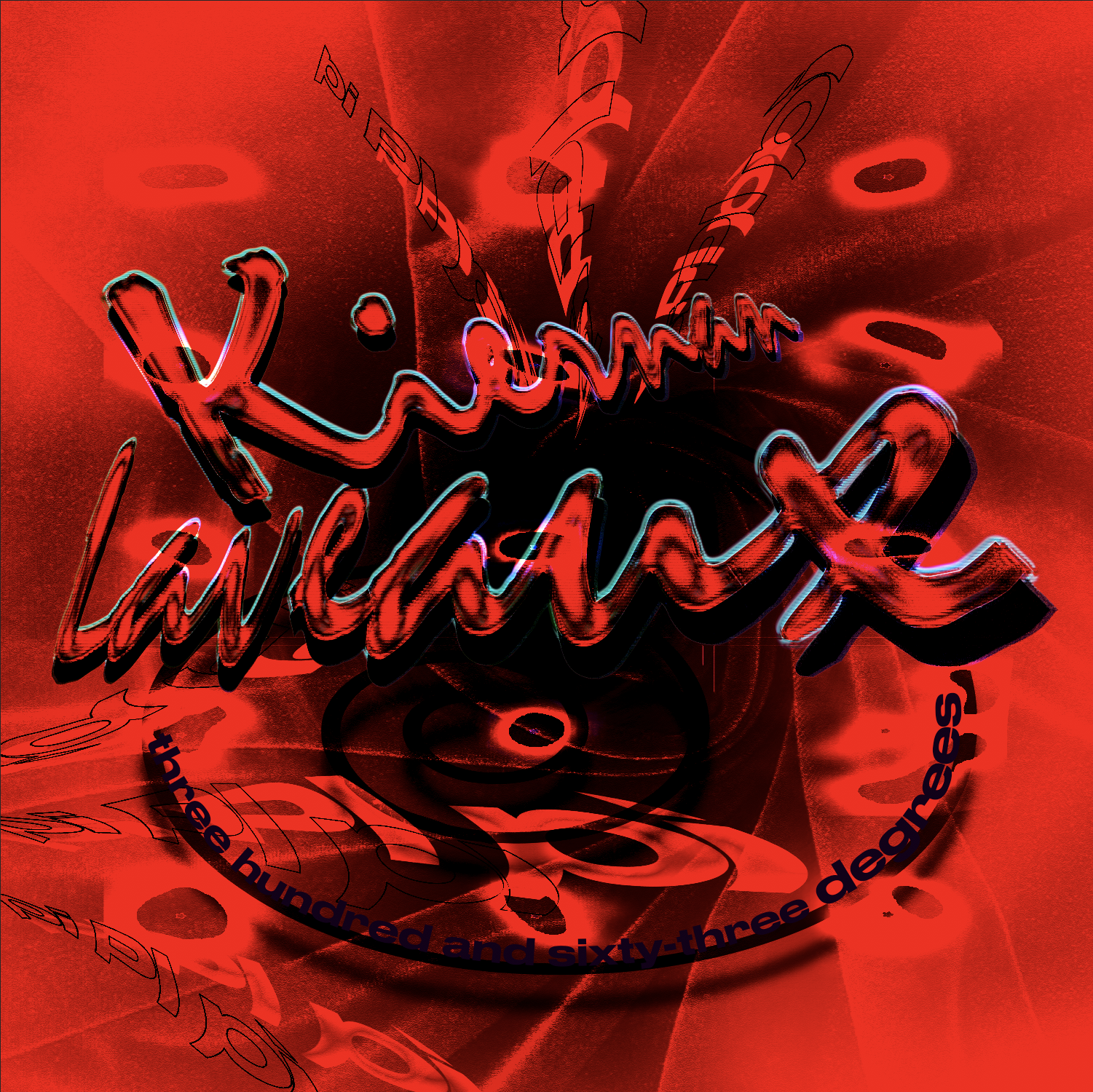 Hey! Thanks for these thoughtful questions
My pronouns are She/Her or They/Them
I currently reside in Pittsburgh, PA
I eat strawberries whole 🙂

So one night when I was 18, I was at a Los Crudos show at the venue that a lot of friends and I would later throw parties at in Cleveland (shout out to Martin and any Limp Wrist fans reading this too!). The venue is next door to a terrible gay bar, I went there randomly (weird for me because gay bars are hell on earth 99% of the time) and ended up meeting a group of queens who said they were from the House of Laveaux and that I was their daughter now. They said I needed a name, and the name they chose for me was Kiernan Laveaux. I never saw them again after that night, but a few months later I began to go by the name when I started DJing. It’s become a part of my being in a way I couldn’t have imagined, and also a way of expressing my inner voice in hopes that it reaches the inner voices of others too – and maybe we all start to sing together.

Everything is musical & leads back to music for me no matter what, but recently leaning into the fact that I’m the oldest of a handful of young people on the paternal side of my family has been a really inspiring perspective shift of life. The potential of being a supportive & loving older person in the lives of younger people fills me with an infinite amount of joy.

I’ve been discovering more about Jewish heritage of mine that’s been attempted to be erased (as it goes), and in turn learning/reading more about Kabbalisitic thought & ways of being – engaging in magic in my own ways has been expanding my perspective on music/DJing the past several years.

I’m far from any kind of expert on kabbalah, but the way energy flow & manifestation is written about and practiced within it has been validating to read, in music but as well as the way it feeds back into life. Even just the ability of the word “kabbalah” to translate to “reception”, “tradition”, or “correspondence” <3

Wow… well the one of many that is calling to me is seeing our friends Mourning [A] Blkstar play live at the Heaven is in You compilation release party in Cleveland in 2016. M[A]B played for over an hour and it was just like, an achievement of life and being. Cleveland is not a place where things succeed or feel beautiful and evolutionary, and M[A]B really rose like this soaring phoenix that a lot of us needed at the time. One of many instances of friends opening beautiful portals into the potential that life can hold for us.

Favorite thing to cook currently? (Feel free to include recipe)

So I love to cook (especially with other people) but recently, I’ve mostly just been doing very simple depression meals for myself for when I’m unmotivated but need to eat.

My go-to has been a big salad:

Voila! Takes about as long as it does to cook the tempeh and is pretty filling, it has been really perfect for days where I’m finding it hard to focus on cooking & being functional

Too hard to pick just one, so I picked 5 people 🙂

SSPS – Straight up one of the most amazing live performers I’ve ever seen, gay headbanger scorched earth rhythm manifesations. Bridges so many worlds of industrial & electronic music that I admire into something truly all his own, but also something to share with the world too!

Jordana Lesesne – Amazing drum n bass pioneer originally from Pittsburgh, she’s made some of my favorite drum n bass tracks ever like “Dragonfly” and “Blueshift” off her album “When Worlds Collide”.
It’s been amazing to see her inspire so many young trans people around our age through the much needed trans intensity and beauty she brings to drum n bass. I I highly suggest googling her, checking out her music/mixes, and reading about all her achievements in music since the 90s.

Cooly G – Literally such a legend, so many tracks I love to DJ and then her two albums that are so touching, with her voice featured prominently. She has an amazing rhythmic finesse in all her tracks, I love how she goes from these super weird dancefloor bombs to these ballads that feel so innovative, but also very much of this understated lineage of bass heavy R&B that reminds me of a lot of the universe of broken beat and UK hardcore. Batu & Anthony Shakir were big in getting me into her music in sets of theirs, and I always feel like I’m hearing new things each time I listen to her.

Afrikan Sciences – Life changing artist – every release, and like literallY EVERY RELEASE, is amazing and just so full of ideas and musicality. Transcends words for me so I just encourage everyone to listen, his music has helped me heal a lot. Future/past/present/beyond/now colliding to transport our minds.

Charles Noel aka Archetype – One of the biggest influences on me and my musical approach. The expanded universe of what him & others were doing in Ohio back in the day and how that connected them to electronic music worldwide really opened up very unique musical ideas and pathways for me at a time that truly helped me to find the notes to sing with my own voice.
Someone who helped me draw the lines & connect the dots to so many inspiring forms of music & art.
Another pioneer of drum n bass music, as well as someone who still remains kind & willing to share knowledge and smiles to this day.

Las Vegas in Cirque du Solei show on no sleep

If you had to describe yourself as a tree, what kind would you be and why?

The colors of their leaves are beautiful and one of my favorite shades of pink, the way the branches grow and tangle while the leaves cascade speaks to me a lot 🙂

I’m thankful a lot of meaningful ones come to mind when I think of this – the one I always jump to with this question is the first time I saw Titonton Duvante & Bill Converse dj in May 2016, somewhere in Ohio. Both are definitely some of the first people who helped me see how unique & personal you can really be with DJing, Bill’s set that night especially helped show me how deep you can traverse the wormhole. It was just like this completely enveloping & beautiful psychedelic phenomena for me. I don’t remember a lot of the music, but I’ll never forget how it made me feel. Eternally grateful to have any of these experiences in life to help me smile and still feel coursing through my DJing to this day.

All of Jaye Ward’s mixes she’s been putting out are consistently amazing, I admire her flow & energy building/coalescence – this one in particular has been sound-tracking lots of afternoon reading

My first gig was one of the early In Training parties we threw around January 2015, part of why I had begun to learn to DJ was to be able to open parties and help with that important role. Back then I was playing off virtual DJ with like no headphones or ability to cue, so I was basically just matching up waveforms and winging it. People were supportive & amazing sets were played throughout the night, I’m thankful it’s a fond memory to reflect on – I always remember a mutual friend, who’s primarily a hip hop producer, exclaiming that night that he realized that
“techno is “just another loop!”

Any advice to upcoming producers/djs?

PRACTICE and have fun! Playing with friends and practicing almost every day & really activating that continuum within yourself & others has been so integral for me. Be around people who love to share how they see & hear things & show you different ways you can express yourself. TRUST that if the things you like to play speak to you, that they’re good and worth playing. This shit is all about you finding yourself within the sounds you love, and other people meeting you at different places within that too. We are all navigating a plastic existence and need real feeling and passion from artists.

Allowing yourself time in all regards – time sometimes coming at you fast and ushering you towards a gig or deadline, or time accumulating as you grow with your craft & grow with LIFE. A lot of this for me has been a really gradual buildup of just doing my thing and trying to be as passionate & consistent as I can be. Don’t feel like you need to play every gig ever, especially when you may be compromising something important about yourself, but playing gigs and that experience of playing for people is so important – understanding where you fit into that kinetic loop of your musical expression meeting other people’s reaction.

Allow every day to be different, some days I mix like 3 records and I’m like “okay that’s all for now” and some days it’s like 3 hours or more just letting it rip. It’s as important to me to have a sesh all afternoon or spend all day figuring out a mix as much as going for a long walk, laughing with loved ones, or watching a movie is. Our lives are the sum of our experiences and I’ve realized how important it is to nurture the different components of existence and how it all feeds back into music 🙂

Lots of ideas swirling in my mind to manifest for the future, but as of right now…

A complete & utter overhaul of the ways we create space, express ourselves, and love one another.