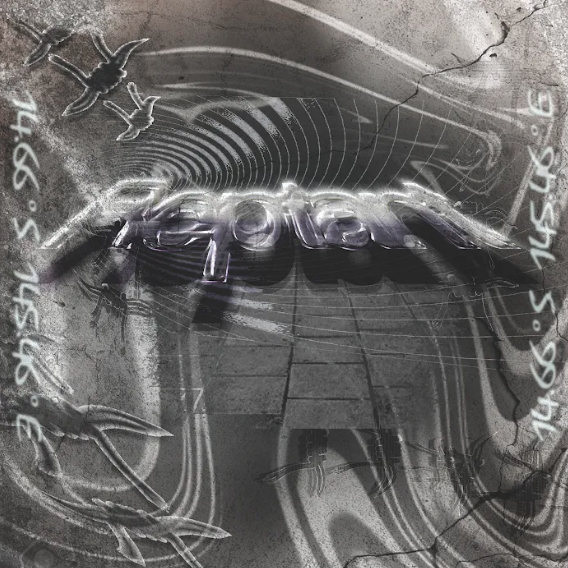 Hello, my name is Lucas (He/Him), I currently reside in Naarm (Melbourne) and I can catch a grape in my mouth as far as anyone I’ve ever met can throw one.

I’m a serious ITD ‘Internet Thesaurus Digger’. I’m always on the hunt for more interesting words that either inspire music/are a great match for unnamed projects and also for general use in life. From memory… ‘Reptant’ came up as a synonym for Lurk, creep, or crawl. I never anticipated it becoming my main project and initially I was just posting ‘deep-ambient-broken beat-dub-techno’ anonymously on soundcloud before I removed everything prior to my first official release.

The sound of a single drop of condensation or water splashing perfectly into a body of water making a resonant bleep/blip/bloop sound, especially if it’s in a cave and you get the reverb of that. It’s so satisfying because for it to actually happen (Cave reverb aside) in a natural environment there are so many variables that are at play: 1. No wind (so the drop of water falls straight down) 2. The water has to be flat/still 3. The distance of the fall has to be correct. 4. silence so the impact of the sound is heard properly… Even with all this, the phenomenon is still so common, it also can happen in your bath or sink and I can do the thing that ‘Cameron’ does in Ferris Bueller’s Day off but it’s more exciting when it happens out in the real world. I think I’m excited by sounds made by liquid in general, sorry for the spiel, loaded question…

My friend Michael (Shout out 2 Ricci) lately I have come to realize how aligned our taste’s in electro are, There’s a lot of junk out there and I think we can agree on what we think is true purist underground shit – Michael is an expert digger and has a few more years of experience under his belt than me, he has shown me so much over the last year or two and it has helped shape my vision (or ear) for music (not limited to electro), i’d absolutely love to uncover the rare tracks he’d have on his USB that i haven’t heard yet, i’m sure they’d blow my mind.

I’m pretty casual about it, (I think it probably shows), I like to pick tracks in smaller sections or pairs, selecting by percussion and groove to tone, space and atmosphere as well as considering particular vibes of tracks, such as ‘Attitude’ or ‘Lurking’. I’ll never be someone who makes the ‘perfect’ mix of one style/mood of music, I don’t think I have the attention span to make something like that as much as I appreciate and admire people who do. I like the mix to trail off in areas and then snap back onto track while progressing as a whole, usually speeding up and building to some point of peak/release. That’s a pretty loose guideline that I subconsciously follow for ‘whatever’ reason and I enjoy all the magic that comes unplanned within the process of recording a m

Lately I’ve been a little slack since coming out of lockdown, but this year I’ve been enjoying making Spaghetti Bolognaise for the house, getting inventive on some communal pizza nights, as well as diving deep into some Szechuan dishes such as Yu Xiang Qie Zi (Eggplant), Kung Pao Chicken, Spicy & Sour shredded potato and getting experimental with fried rice.

What do your parents think of your music?

Dark stormy night on hour 6 of driving through nowhere

1 track to convince someone to marry you

If you had to describe yourself as candy, what would it be and why?

I’m definitely a bit of a Sour Gecko.

Recently some friends started a new party called Techworld, there’s a number of reasons why this is IT for me at this time, 1. It’s a monthly party starting at one of the most exciting new local venues ‘Miscellania’ (Run by the best people) 2. It’s an after-hours party starting at 7AM on Sunday and goes until 1am on Monday morning (17 hours), clubs here usually close between 3am-6am so it’s super sick to have the option to keep it going but also going in fresh faced which I did last weekend was great too. Clubs like this only exist in the south side and play generic tech-house (bad tech house) 3. My friend Elliot built a 4ch DJ mixer from scratch which I had the pleasure of helping design, we stamped a techworld logo on it and it survived the 17 hours! (It sounded great) it will be the party’s mixer going forward. 4. Tech-house (good tech-house) is the music of the people!

Techworld! Haven’t had quite a moment like that on a dancefloor since even before covid… so it was an epic ‘now we’re back’ moment.

I think it’s probably 22 degrees celsius, you can do anything/wear anything in that weather comfortably. I feel like anything can go music wise, maybe nothing too dark. Downtempo if you’re chillin, Dance music if you’re driving (windows down).

Velv.93 Podcast for Furthur Electronix. Have been playing a few of the Velv.93 mixes lately, bringing consistent vibes when hanging out with friends, while also being super well selected, he’s definitely digs deep.

First gig was for Rudolf C and Shedbugs first ‘Untitled’ party in 2015, they booked me to play but I didn’t know how to DJ yet so they told me to bring my drum machine and sampler and I prepared 45 mins worth of Lou Karsh material. It went down pretty well to the 20 or so people left in the club at that point, though in hindsight I probably would have left the club if I was on the other side of the booth…

You are your own best teacher.

More of an equal balance between not taking things too seriously and keeping your responsibilities in check as partygoers, promoters, labels and djs.